Computing the total of a bill, taking Service Charge and 12% VAT into account is a common task that software engineers or spreadsheet developers may have to do.

Let's say you, for some unfortunate reason, have to compute how three people will split a restaurant bill, including VAT and Service Charge. You read "What Every Computer Scientist Should Know About Floating-point Arithmetic" then, applying the lessons there, do one of the following:

And assume that the issue is fixed. Then fast-forward a few days (or weeks) later, finance calls you and informs that their computations do not match yours, and that you're off by a cent in a couple of areas. What's happening?

It's important to note that monetary arithmetic is case-specific. This means that even when using error-minimizing numerical representations, you still need to be aware of how the values are used in your case when implementing operations. Similar cases like this include:

The result of this error will then again be dependent on the case. If this algorithm is part of an automated system that processes 1,000 transactions per day, then that's a loss of ₱10 per day (note that the accumulation depends on the volume of transactions, not on the magnitude per transaction). While percentage-wise, it might not be much, many businesses still care about the absolute value and the value goes up the higher the value of the base currency is (imagine of we operate on Euros rather than Philippine Pesos).

If it's just a utility mobile app, then hope that your users are smart enough to decide who pays the additional cent or the restaurant they are in would just waive the cent. In this case though, an alternative is to have everyone pay ₱33.34 and put the spillover as part of the tip.

Note that in this case (and also in other cases), using an infinite precision number, does not fix the problem. In this instance, additional decisions need to be made on when the rounding happens, and where to channel unavoidable excesses or discrepancies as a result of calculations.

These issues arise mainly because of two things:

Monetary value is a finite-precision decimal

We stop at a certain precision level (usually cents) because we use base 10 for counting and computation as opposed to continued fractions or rational numbers and that "physical" space is limited when writing down those numbers. Imagine how your grocery receipt will be if the amounts are written in fractions. This limitation is not because currencies are old. In fact, Bitcoin also has a precision limit: the smallest bitcoin unit is a satoshi which is one millionth of a Bitcoin. So one could say that using infinite-precision numbers is an approximation of finite-precision monetary amounts!

An exception proving this rule is FOREX, microchips, AWS EC2 pricing, and things that are usually sold/exchanged in bulk. For example, for FOREX, sure it's more than 2 decimal places (1 JPY = 0.4416 PHP), but if you wanna do the actual conversion, there's a minimum amount! You can't just go to a FOREX and trade exactly 1 JPY for PHP: they usually have a minimum amount and can only trade in multiples of that amount (e.g. can only trade per 1000 JPY). Moreover, the reverse exchange rate (PHP → JPY) rate is not the reciprocal (computing 1/x) of the JPY → PHP rate but an entirely different measure altogether (but it's usually used as a rough baseline estimate) so there's no direct need to compute 1/0.4416 with high precision.

Other goods sold in bulk follow the same pattern, like the 555 timer, although the unit price's precision is less than a cent ($0.09551), one cannot just buy 1, but will have to purchase at least 6,000 of them (the Minimim Order Quantity).

Remember in grade school when you were taught division and the remainder was introduced? This then led into fractions and decimals. In other words, division can generate additional information that cannot be represented with the data type of the operands (an integer divided by an integer can result in not an integer).

While division is the only operation that can generate precision, there are ways where it can sneak in like multiplication by a fraction and exponentiation. As such, it's more helpful to whitelist operations that do not generate precision. They are:

The two reasons above are at odds with each other

Unfortunately, division is a common operation when dealing with money like splitting bills in the first example. It also arises when computing for discounts and markups. Exponentiation of money appears when computing interest in financial instruments (loans, investments, and derivatives).

Fortunately, there are two rules and two guidelines to follow. They are relatively easy to understand and does not involve complex math (though number literacy is needed) so you do not need to know Kahan Summation or some complex algorithms in order to understand them.

Rule 1: What's displayed is the truth.

This rule seems easy enough but require diligence to follow: every number that a product manager (or government regulator)  requires you to show, will be a number that gets replaced with its rounded value. It's very easy to just show the number without revisiting the calculations.

For instance, when working with spreadsheets (e.g. Excel), it is not enough to format the number: the rounding has to be included in the formula themselves. Drake here will show an example:

Why this rule? It's because what you show the user is the value that's going to be used, not that highly-accurate, infinite-precision number stored in memory. They will see 12.35 and copy that number to their reimbursement form, their tax forms, insurance claims, etc. they won't be bothering with 12.354915.

Rule 2: Splitting should sum up to the original.

If the division is a splitting, adding the parts should give you the original value. While obvious, this becomes tricky to implement especially with the context of the previous rule. The first example illustrates this perfectly: 100/3 = 33.3333... and applying Rule 1, the actual value becomes 33.33. However this rule requires us to counter-check: 33.33 + 33.33 + 33.33 = 99.99; we are missing one cent! Where that cent goes is up to you or the product manager (see guidelines below) the important point of this rule is the awareness that discrepancies like this may exist!

A common (but not the only) way to resolve this is to make one value the difference of the original and the total of the other values. Mathematically speaking, if T is split into p1, p2, ..., pn, then instead of computing pn directly, you compute pn = T - (p1 + p2 + ... + pn-1) instead.

Here are some cases to watch out for this rule:

Guideline A: Know which values are magnified.

Where should the missing (or extra) cent go? One aspect that can help with the decision is knowing which values are magnified. In many cases, there is asymmetry on the volume of transactions: like how a customer may buy from a store at most once a week but the store processes hundreds or even thousands of transactions per day. So the effect of a discrepancy in calculations is more magnified in one than the other.

For example, suppose from a computation, an extra cent will have to go somewhere and we have to decide whether it should go to the customer or to the store. A customer paying an additional centavo would mean almost nothing for them because even if they buy stuff from your store everyday, they'll lose 3.65 PHP per year. Compare this if the store pays for the extra centavo instead, if they receive 100 customers per day, then they will end up losing 365 PHP per year. In this case the one centavo's effect is magnified more for the store than for the customer.

This does not automatically mean that the loss should be shouldered by the customer, but it does elaborate the effects of decisions. More often than not, these decisions are judgements that may need to be propagated to management, especially if regulations are involved (what if we're referring to tax instead?)

Guideline B: Sometimes, predictability is better than accuracy.

Reaching for the round function all the time might be tempting because it's the most "accurate". However, rounding down or up might be better in some cases because their error is more predictable:

Compare it with round function which, does not have such guarantees (it can be greater or less than the original value). When would rounding up or down be better? Here are some cases:

To illustrate how the rules and guidelines are applied, we compute the bill of three friends eating at a restaurant, taking into account the service charge and VAT, and how much would each pay if they decide to split the bill. Here are the important points:

We first compute what should be printed on the receipt:

Computing the split between friends is trickier: we first have to factor in the service charge to each item, then split the price of the drink, service charge included, proportional to the order amount of each friend.

There are two ways to compute the price of each item with the included service charge:

Here's a diagram to aid in understanding where the amounts flow. 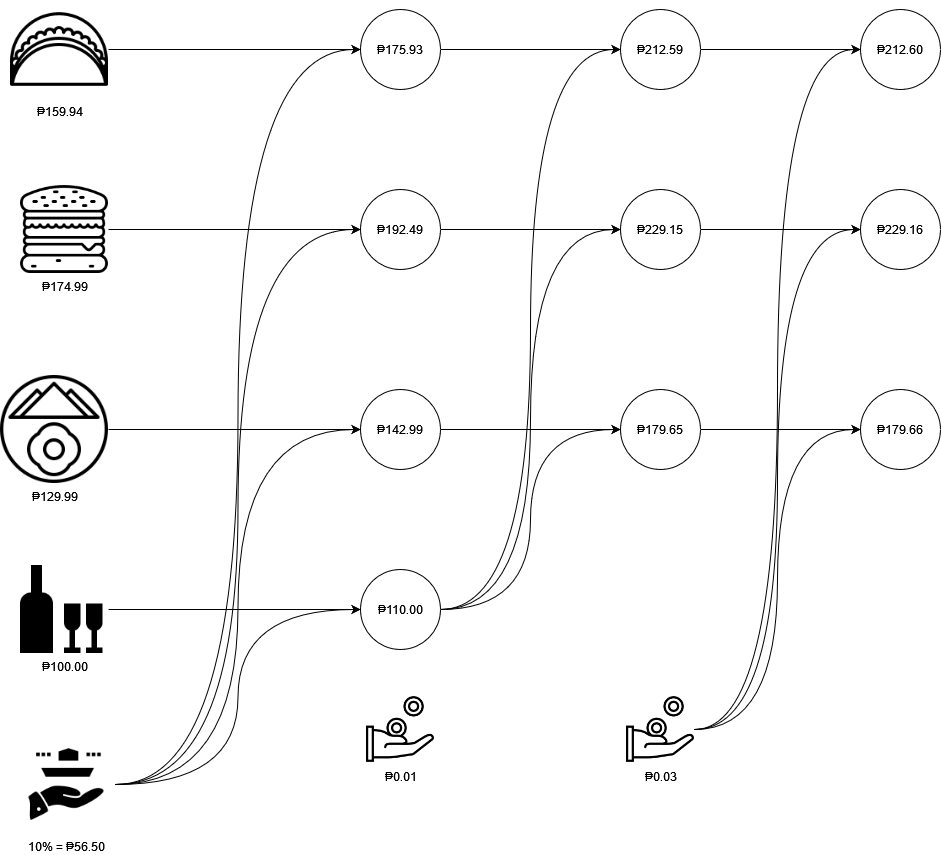 The computations in Google Sheets can be accessed here.

Monetary amounts require a bit more nuanced handling than ordinary fixed-precision number. One thing to keep in mind is like matter, money does not magically increase or decrease when you perform transactions (unless we are talking about interest). The rules and guidelines discussed help rationalize the choices we make when performing calculations with them.

Computations like these come up in our projects from time to time (one being the Service Contracting Program) and it's something that we pay close attention to using the rules and guildelines discussed.

If you’ve found this interesting or helpful at all:

P.S.: This blog post is inspired by https://blog.xendit.engineer/benchmarking-pg-numeric-integer-9c593d7af67e head over there to know the tradeoffs in representing monetary arithmetic in PostgreSQL! 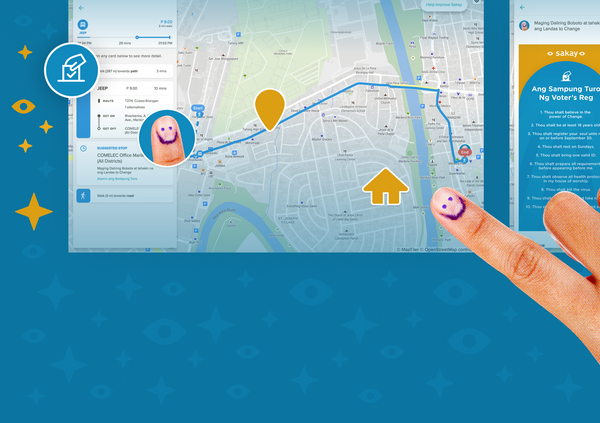 Our geospatial database of all COMELEC offices in The Philippines is now available. Access it here.

The Sakay Blog
—
How to Compute for VAT and Service Charge the Correct Way™️™️™️ (or: Monetary Arithmetic is Case-Specific)
Share this